Will People Fight to Live in North Minneapolis? A Draft Vision to Stop Gentrification through Community Power

Gentrification is an urgent issue of community defense, locally, nationally, and globally. U of MN based researchers call it “the shrinking city,” a process by which  working people – particularly people of color – have fewer places to live. It is part of a broader set of struggles in our racist, violent society about people making money off of pain in places like North Minneapolis: including police brutality, prisons, schools, and more. This article is written by IWW and GDC member db, a newer white resident in North Minneapolis, with the hope of inspiring thought, debate, and faith in the possibility of a different world.

Time Is Ticking – Northside, and Minneapolis, is Gentrifying

Sometimes a few words hit you so hard it leaves bruises. A few months ago I asked the most optimistic brother I know, a realtor who focuses exclusively on North Minneapolis, how long the window will remain open for black and poor folks to buy houses in North Minneapolis. He said “maybe five years.” Point being, he thinks everything in North Minneapolis will be bought and sold to middle class white people with families planning on staying – in 5 years. This is a new pattern of change from speculators to settlers, and he knows because he is selling houses right now, doing his damndest to try to get black folks and others to access housing programs. If this expert’s opinion is correct, if we do nothing, the current neighborhood and its people will soon be gone.

I don’t see how the community can generate the cash flow in that timeframe, or ever, to own it. Shifting the future therefore requires shifting our power on the ground. But if any neighborhood is up to it, it’s this one. No one should sleep on North Minneapolis. Because there is no question that North Minneapolis is gentrifying. Rising rent and discriminatory rental practices are pushing out black, brown, and working class renters. Property value is going up and money is pouring in – not to or for current residents, but for a coming middle class white majority. Homelessness and desperation are on the rise. Fifty percent of the Metro’s people of color now live in the suburbs, destroying hard fought social networks and bonds and moving people farther from employment and public infrastructure.

Two key things – first, pushing out of existing residents, and second, spending money on those to be brought in, not those that are here – make gentrification different from neighborhood improvement. Improvement is welcome. Getting the boot is not. Gentrification is planned economic violence as part of a capitalist  economic system, which prioritizes money over human well-being.

How is this happening? Consider the rapid increase in Minneapolis rents over the last 6 years, or the 14% rent increase in 1 month last summer 2016 – the highest in the nation that month.  According to Rent Jungle, a consumer website, rents have gone up 60-80% in the last six years. This is landlord greed, pure and simple,  taking advantage of the reurbanization of cities taking place across the country. I’d be curious if there is clear research on the causes of this but I think causes include depletion of rural economies, the urban migration caused by college becoming a bread and butter necessity, real-estate-ization of the economy, preparation for white fortress during climate change, and the general rejection of suburban life by young people (if someone researched this I’d love to see their conclusions!).

Gentrification impacts everyone, but blacks are hardest hit. The Star Tribune reports that  in 2000, a white renter with median income could afford to live in 50 percent of the rentals in every part of Minneapolis. This is no longer possible in many neighborhoods. For Latinos the affordable area shrank to a small area in South Minneapolis, while for blacks there is no affordable area left.

Shifting power means fighting for where people still are, and that means North Minneapolis – while people are still here.

How and Where Gentrification Shows Up

When I moved to North Minneapolis to work in a school, I was surprised to notice a sprinkling of longtime white southsiders living there, pushed out due to rising rents or inability to afford a home there. Now North Minneapolis is a candidate for the city’s “hottest housing market”. Young white homeowners are appearing all over, as North Minneapolis is the last affordable place in Minneapolis to buy a home. The City is pushing this process by offering $20,000 for prospective homeowners to buy vacant lots to build houses and $75,000 for developers to do the same – a good lure for middle to upper class people but insufficient money for most working class people to capitalize on. 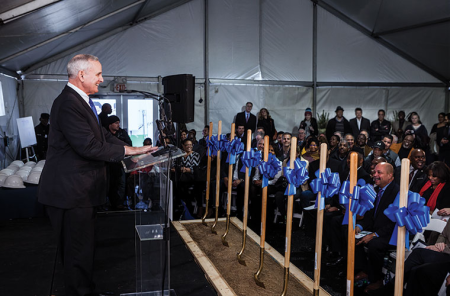 Nor is there any doubt that gentrification is happening. According to a recent study using “three accepted indexes of gentrification, the researchers found it most prevalent since 2000 in South Minneapolis along the Blue Line; parts of Northeast; Willard-Hay and Harrison in north Minneapolis, and Hamline/Midway and Frogtown in St. Paul”. See their full research report here. The trends will intensify even without new development to attract a different clientele and that development is already on its way. Townhomes are coming on Olsen Highway, a new Light Rail Stop on Penn are rapidly changing the landscape.

On Penn Ave alone there is a string of new construction including a brewery, ‘creative office space’ and ‘artspace apartments’, Thor Headquarters and a Target sub-headquarters with retail space, a clinic and theater expansion – funded by MN’s biggest corporations, a coop grocery, a ‘medical office project’ and another, nonprofit grocery store. 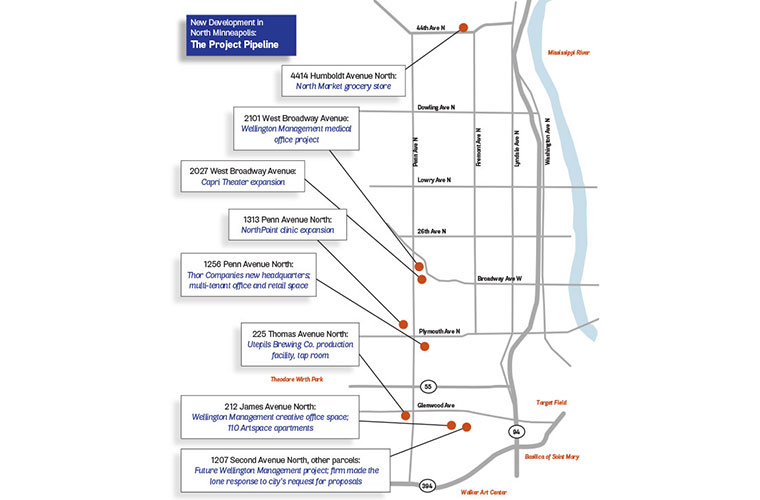 This is what intentional gentrification sounds like: “The urban nature of these sites doesn’t scare us away,” says David Wellington, director of acquisitions and development for Wellington Management, a key player in the abovementioned properties. Their slow, consistent investments for more than a decade have proved “very profitable” on the Hiawatha corridor over South Minneapolis. Wellington says his company “takes a long-term view of real estate and is not banking on a quick payoff from the projects”.

Five or ten years, after all, is not long to wait for real estate a few miles from downtown at bargain bin prices. Developers like Wellington Management are intentionally poised to profit from the way that the 2008 Foreclosure Crisis drove these property values down and directly targeted and ravaged the black community, halving the total wealth of black people in this country. So too did the Tornado have its ‘uses’ for some. Not to mention the coming Upper Harbor Terminal developed, transforming an abandoned industrial park by the river to what appears to be becoming a uniquely North Side show venue for white folks, developed in part by First Avenue. Worse is the City Council’s disgusting misuse of its  “Green Zone” – a policy designed to repair the history of racist pollution being used to intentionally displace the Northside residents for richer folks that want their environment clean and river access open.

Without a serious shift, a new Northside will feature hipster hip hop shows with black artists, black bouncers, tabled for by white immigrant rights or environmental groups while excluding working class black, native, or immigrant residents – unless they already own their homes!

Seeing these changes drove me to learn what could be done and to think about my context. The learning was both daunting and encouraging. It is clear that the time to act is now, and that we must point out the massive amounts of money being made off both poverty and displacement. However, in many ways, the tools we need to stop gentrification are at hand. The history we need is all around us, though we all have more to learn, and I hope to learn more from those Northside warriors and others who have made the present as livable as it now is – and I thank them for the tools they have created.

Hope to stop gentrification over North? Use these tools to shift power, redirect funding for neighborhood uses, and build stronger, more connected neighborhoods.

Current Fights Against Gentrification in Minneapolis

Gentrification is not happening in Minneapolis without a fight. There are also at least two inspiring ongoing fights against gentrification right now in other parts of Minneapolis – Defend Glendale Townhomes in SE Minneapolis where East African and other residents are fighting to keep living in affordable public housing, and Inquillos Unidos Por Juticia, a latinx renters organization which is currently fighting individual slumlords and that may soon be fighting for citywide rent control.

Recent fights against gentrification in Minneapolis include the Firehouse Collective in North a consciousness raising and community development project, a mixed outcome at the Seward Friendship Store where a community benefits agreement was signed, and at Lowry Grove in Northeast, a failed fight that represents in many ways the total loss of the Northeast neighborhood to gentrification. One of the key reflections from the struggle in Northeast was the importance of having faith in our capacity to fight and make change – “We had ideas. There was so many people, with so many ideas, but none of us ever thought we could actually do it. We didn’t think it was possible.”

Gentrification Can Be Stopped – Strategies for Discussion

Is stopping gentrification over North possible? I know some students who studied gentrification on the Northside this last Spring, and some of us thought it was, but it requires that a fight begins now and embrace both realist tactics and grand visions for the possible. While the actual process is up to those who fight here are some principles and questions I’ve gathered from past struggles, which I think are worth debating as we strategize our collective futures.

Two realities stare each other in the face – will North Minneapolis, and the city as a whole, be a place working class people, particularly people of color, can live, or will they be displaced?

Will the people have power or be separated from each other – into ‘peaceful protesters vs outside agitators outsiders, gang members, or white anarchists’?

Will people take the necessary steps – law be bent, or damned when necessary – as in the insurrectionary protest traditions of the Dakota Uprising, 34 Teamsters Strike, Farmers Foreclosure Auctions, Anti-Racist Action, and more, creating an actually nice MN?

Will we fight for our right to the city or be displaced to the suburbs? If victory is not possible should we demand that resources go to the rapidly changing suburbs now?

The future is up to us.

Some Useful Places to Start Reading:

“Minneapolis Will Pay You To Build a House on the North Side”, City Pages